LOVED THIS BOOK! Probably the best of the series so far. Bonnie's talent keeps getting better. Also, the cover is seriously amazing.
Tweet I really enjoyed this book. It had really good pacing, characters, and story. For a debut novel, this is downright amazing. So much fun to read.
Tweet I loved this story from start to finish. Excellent characters, awesome world. The magic and mythology made sense. It was awesome. Oh and the twists...so many and definitely not expected. This is not a story for the faint of heart and I'm not talking just about the sex. Frankly, the sex isn't what drives the story. The characters do. The flawed, beautiful, and sometimes broken characters. Their stories, their hopes, their dreams, their mistakes, their successes.

To quote Zach, this isn't some trashy novel written by a guttersnipe author. There is a reason that Tiffany Reisz is an award winning novelist.

I will be honest, it took me a little bit to realize that Nora is probably one of the strongest characters in the book. Initially, I thought she was broken. This is only because I was seeing her through Zach and Wesley's eyes. Seriously, like it's name says, it's creepy. There were times when I wanted to shower in bleach. Well written and well crafted. Oh and the twists...
Tweet I honestly loved this story. I was able to immediately forge a emotional connection with the characters. Yes, Amy is a very grumpy and difficult person. I know some people have complained that they couldn't connect with her, but I did. She was complex and real and she grew throughout the story.

I came away with several things:
1) Amy is really a good kid at heart, she's just had a rough time and made some seriously bad decisions. She wants to be noticed. She wants to fit in. She wants to be loved.
2) Amy's mom is really not a good person and is too focused on herself and not emotionally there for her daughter which is a lot of why Amy is the way she is.
3) I really want to read Cassie and Lila's stories.
4) Did I mention I wanted to smack her mom?
Tweet

I really enjoyed this book. The characters were well rounded and had their own quirks, etc. I liked that Ever, the main character and narrator, was not your typical female lead in a romance. She was confident and had only the typical, and reasonable, body image issues of your ordinary 17 year old. This allows a real story to be told that doesn't have half of it taken up with her wondering why guys think she's cute.

The romance is hot, steamy, and swoon-worthy. Lots of kisses. It does have real issues in it as well. There was one part that made me very sad. That scene was beautifully written (I try to keep my reviews spoiler free, so you'll have to read it yourself).

It's a romance with some paranormal tossed in for a little extra flavor. Definitely worth the read.

The ONLY issue I had (hence the 4 stars) was I felt the paranormal was not explained that much. There were several things hinted, but none of it was resolved. Granted you don't want to give everything away in the first book of a series, but it would have been nice to have some of what was going on explained more. I'm hoping the author explores more of this in the next book (which I very much want to read!)
Tweet Such vivid descriptions. Gripping story. I was hooked from the beginning. Definitely a must read. Origin is perfect.
Tweet Loved this story. The world was so real and the characters, dialog, everything. The fights were quick and visceral. Yes, there is romance and steamy kisses, but it fits so well into this story.
Tweet Absolutely loved this book. Having never read steampunk in novel format, I wasn't sure what to expect. Can I just say that this was an awesome introduction. I have now added words like "Dollymop" to my vocabulary (which is an awesome word, but I wouldn't call a woman from the Victorian era that or you'll get slapped!) and my other favorite "Hoyden".

The language, technology, and story were so well crafted and believable. I can only imagine the immense amount of research that went into this book. So well done.

Also, don't let that whimsical cover fool you, there are some seriously dark moments. I just loved this book. I was actually sad when it was done. I didn't want it to end! Sigh, I guess I'll just have to sit and wait for her next series to come out. I do hope she does more in this series as the world is so vibrant. I loved the characters, story, everything. Seriously awesome book.
Tweet My favorite scenes involved a helicopter ride across a street, a ride on the back of a dinosaur, plus an infamous scene involving a jetpack on an alien landscape. Seriously, you can't get weirder, or funnier, than that.
Tweet I was lucky to get an early copy of this and loved it. Ada weaves a fun and entertaining story. I described it to her as a Vampire Super-hero story. Not sure if it fits or not, but that's the way I see it. :D

So much fun and I can't wait to read the final version. If you liked ReVamped, you'll like this one even better.
Tweet 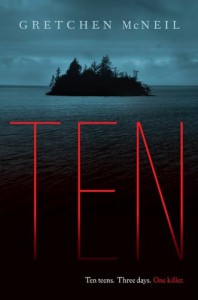 Ok. Seriously awesome book. Loved it! I thought I was all cool and figured out who the killer was...yeah...not! Totally did not see that coming. I was so sucked into the book I didn't even realize my hands were shaking until I finished. To be honest, the trailer hooked me on this story and I'm glad I finally read the book. Awesome post-apocalyptic Los Angeles. Just an awesome book with some creepy villains. :D Would love to read more in this very detailed world that Ms. Bosworth created. We can only hope. :D
Tweet
next »